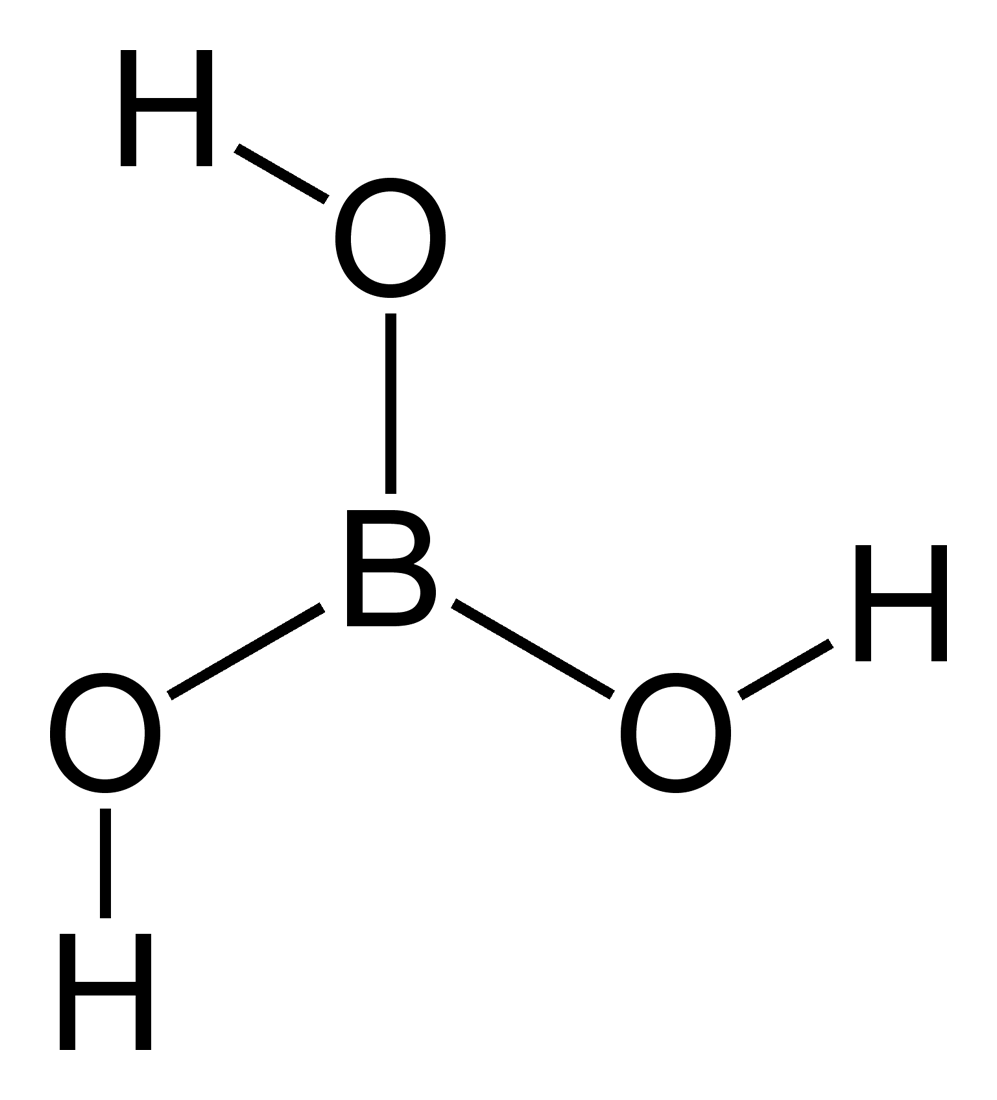 Boric acid is a chemical compound that contains the elements oxygen, boron, and hydrogen. It is a naturally occurring chemical compound. The element boron cannot exist by itself in natural so it must combine with other common elements to produce compounds such as boric acid. Boron combines with sodium such as borax and oxygen to produce boric acid. Boric acid produces small white crystals that are odourless and tasteless. In the granular form the texture is similar to table salt and in its powdered from it takes on the texture most similar to baby powder.

Boric acid is a weak acid derived from boron that is often used in things such as antiseptic, insecticides, anti-fungal medication, flame retardant, as a precursor to other chemical compounds, and as a neutron absorber. Boric acid is found in nature in things like fruit, plants, and sea water. Boric acid is soluble in water that has reached its boiling point. Boric acid is introduced into the environment by normal human activities such as power generation, coal burning, copper smelters, and mining.

Boric acid is known for its many different beneficial properties. It makes a good antiseptic wash as well as a wonderful anti-fungal aid. It is an important ingredient in many different pesticides. It is used in some lubrications as well as nuclear power as a neutron absorber.

It is believed that the use of boric acid goes all the way back to ancient Greeks who used the acid as a way to fireproof clothing. Many times over the year’s boric acid has been used in different applications until it has been proven that either the methods that it was being used were dangerous or better alternatives came along.

Boric acid was first discovered by Wilhelm Homberg when he mixed borax and mineral acids with water. When the water evaporated it left tiny crystals of boric acid that was then referred to as “Homberg’s salt”. After this discovery many researchers discovered over time that the properties of boric acid make for great antiseptic and mild eyewash. James Wright an engineer in WWII took boric acid and mixed it with silicone oil which later would become what we know today as Silly Putty.

Boric acid is derived from borax which can be mined from certain areas in the world. The secret to borax mining is finding where the borax is. There are numerous mines all over the world with one of the largest being in California. Miners will have to drill down in order to get close to the reserves of borax and extract it from their mines. Borax is usually found in large chunks that would remind a person of rocks. After a large amount of borax is discovered it is transported to factories where it is crushed down. Crushing the borax makes refining and transportation much easier. The whole mix is refined in order to purify the borates to make them more useful for industrial purposes. The borates are then sent through a liquid bath where other solids are removed from the mixture. As the liquid cools borate crystals start to form. Then the whole mixture goes through numerous filters and is cleaned, once everything is dried. The whole product is then packaged and shipped to companies where some of them will be used to create boric acid.

We aim to deliver you the best quality boric acid possible. Check out our About Us page.

100% money back guarantee for 3 months

We ship to all corners of Australia

There many uses of boric acid.